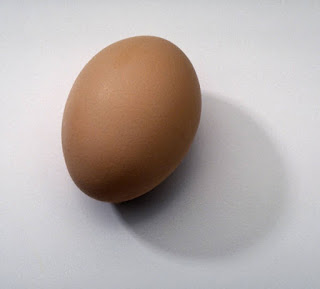 It is always the simple that produces the marvelous.


Have you heard that new McDonald’s slogan?


I have – at least nine thousand times...


“The simple joy of having it all.”

And it’s cracked me up nine thousand times, too.


There is absolutely, positively NOTHING simple about having it ALL.


I don’t know about you, but I’m just not feeling the joy there.


Here’s a slogan that’s more to my liking:

All joy is simple.

I figured it out back when I was five –


in the moment I reached beneath the red hen and discovered…

PROMPT: I’ll bet that you knew the “All joy is simple” rule back when you were five, too. What was your moment of delightful discovery?


Wishing you a weekend of simple joy…

Posted by Barbara Davis-Pyles at 7:04 AM 2 comments: 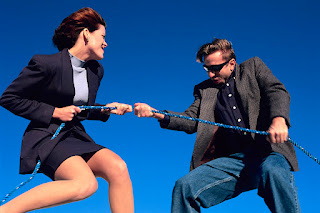 I hope you all enjoyed the presidential debate last night.
I certainly did. I actually found it quite medicinal –


As a person who has pretty low blood pressure, I used it as a sort of beta-blocker blocker.
Anyway, it got me thinking that we shouldn’t let the candidates have all the fun. In fact, I think it would be much more of a kick to see far more interesting “people” go after each other on topics that really matter.


What if Bella of Twilight and Hermione of the Potter Series faced off on vampires vs. werewolves?
How about Mr. Incredible vs. Superman arguing capes vs. no capes? And what the heck, throw in Edna Mode and Batman as moderators just to make it interesting.


We could have witches wrangle the pros and cons of poison apples vs. poppies…
Or Zeus and Jupiter brawl over who’s the Biggest, Baddest God with a bod.


And finally, Captain Underpants and Winnie the Pooh could debate what to wear (or not to wear) down there.


PROMPT: Here are a few folks who may have a bone to pick, so pick a pair and go!
Tonto vs. Robin


Dwarfs vs. Munchkins
Donald vs. Daffy


Alice vs. Dorothy
Gandalf vs. Dumbledore


And then there’s the battle of the Scrooges – Ebenezer vs. McDuck…
Don’t you wish politics could be this much fun?

Posted by Barbara Davis-Pyles at 7:25 AM 2 comments: 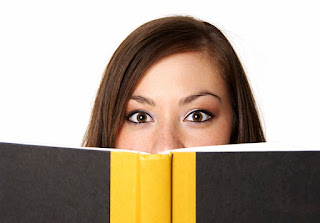 A book is a loaded gun in the house next door.
Burn it.
Take the shot from the weapon.
Breach man's mind.
Who knows who might be the target of the well-read man?

Yep, it’s time for one of my favorite celebrations of the year –
Banned Books Week!


So let’s take a moment to honor some of the big baddies that have been removed or restricted from libraries or schools across the good ol’ U.S. of A.
Hatchet by Gary Paulsen has been banned by some schools because it has descriptions of trauma and injury that are just too… well, realistic. Yes, you can get banned for good writing.

Anne Frank: The Diary of a Young Girl has been banned for being too depressing. Gee, genocides usually are.


James and the Giant Peach by Roald Dahl contains mild profanity. It is also anti-authority and anti-aunt. Apparently SOMEbody’s aunt got her knickers in a twist over it.
The first Where’s Waldo by Martin Handford reveals a topless sunbather’s partially exposed breast. Perhaps the entire series should be renamed Find Frontage (trust me, it’s a LOT harder to locate than the big W).


How to Eat Fried Worms by Thomas Rockwell has been banned for encouraging children to engage in socially unacceptable behavior (like looking for breasts in the Waldo series, perhaps?). It is also said to promote gambling and profanity.
By the way, my 4th grade teacher spent weeks of class time reading this one to us (with pretty apparent delight)… Yeah, I know – that explains a lot.
The sweet picture book And Tango Makes Three by Peter Parnell and Justin Richardson made the top of the Banned List in 2006, 2007, 2008, and 2010 for the shameful act of telling a true tale. Back in 2000 at New York’s Central Park Zoo, two penguins hatched an abandoned egg. The problem? The penguins were both male.


A Light in the Attic by Shel Silverstein has been given the ax more than once for encouraging disobedience and (gasp!) messiness.
And finally, there’s Sylvester and the Magic Pebble by William Steig, a charming book about a donkey who collects pebbles. Well, this one has been banned in some schools and libraries because it portrays policemen as pigs.


Nobody seemed to mind that the story’s main character was actually…
an ass.

PROMPT: Read a banned book this week just to celebrate your freedom to do so. Then get to work on authoring your own awesome list-maker. Oops! Did I just encourage deviant, defiant, and disobedient behavior?
Yep. (Says the soon-to-be-banned blogger)
Posted by Barbara Davis-Pyles at 6:31 AM 4 comments: 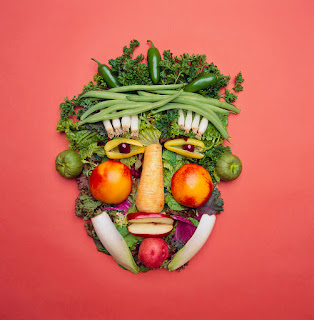 October is National Vegetarian Awareness Month.
So here’s my question –


Do vegetarians have a keener or duller sense of awareness than those of us in the omnivorous camp?
Okay, that one was probably left over from Ask a StupidQuestion Day. My apologies.


You know, I once sat next to a real live vegetarian at a friend’s wedding reception.
“I’m a vegetarian,” he said. I think he wanted to make sure that I was aware. Then he proceeded to tell me that he did not eat anything with eyes.


“Hmmm,” I said, biting my cheek to keep from mentioning the half-eaten potato on his plate. It was a festive occasion after all, and I didn’t want to cause some kind of vegetarian scene.


Well, my job here is done – you have been made aware of those gentle souls among us who forgo the use of their canine teeth.
And hey, I have no idea how these national months get established…


But… well… there’s another bit of awareness I think I ought to mention –
October is also...


PROMPT: Pork Lover meets Aware Vegetarian – and look out! This would be a great way to give yourself a dialogue workout. What happens? Could they, would they… fall in love?
What about your Work in Progress – are there any hairy, scary, vegetarians in the mix?


Disclaimer: Any insinuation that all vegetarians are hairy and/or scary is completely unintentional…I just like saying hairy, scary vegetarian.
Disclaimer #2: No animals and/or vegetarians were harmed in the making of this blog.

Posted by Barbara Davis-Pyles at 7:01 AM No comments: 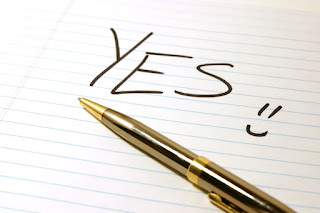 I don't focus on what I'm up against. I focus on my goals and I try to ignore the rest.
~ Venus Williams


What keeps me going is goals.
~ Muhammad Ali


And that means I’ll take some time out today to write down some go-getting goals.


Yeah, I’m one of those crazy New Year’s resolution folks, as well. And frankly, I do not care that those same 5 pounds have shown up on the list every year since 1993 – dang it, it just feels good to take time out once a year to imagine them Some. Where. Else.


Anyway, I’m pretty sure that I get a heck of a lot more writing done when I put my goals on paper.


And I’m in good company…


Dr. Gail Matthews of Dominican University of California found that those who wrote down their goals accomplished significantly more than those who did not. For those who also shared their goals with a friend, achievement went up even more.


Then there’s Dr. Dave Kohl from Virginia Tech who found that goal-writers earn 9 times more over their lifetimes than the folks who did not. Cha-CHING!


But you don’t really need to look at the research to realize the POWER of writing down goals. 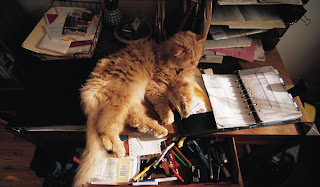 It’s a pretty well-known fact that cats DO NOT write down their goals.

And you can bet his novel’s not finished either.

PROMPT: Do you have a writing/art goal for the month?


If you’re not a goal-setter, try it this month for those creative projects you usually just dream about. Keep your dreams BIG, but make the goals you set small, achievable, and deadline-driven.
Posted by Barbara Davis-Pyles at 8:05 AM 6 comments: