WHOse Idea Was This? 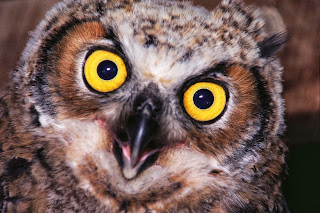 I’m pretty sure they were Harry Potter fans.

After all, we've talked before about the many ways in which that fabulous series has influenced the world and its populace.

This time, however, the influence didn't work out so well.

You see, last week a muggle couple in the UK decided that it would be absolutely brilliant if an owl served as the ring bearer in their wedding.

I’m pretty sure they had visions of Hedwig souring in with a flourish to make a special delivery just before the vows were exchanged.

Obviously, the “magical spell of Hogwarts” made said couple forget the basic zoology they learned in primary school.

Which means, of course, that our days are owl nights.

So imagine, if you will, being woken up at 2:30 in the morning and told to look “wedding fabulous” while delivering a package without so much as a single slug of joe.

I’m betting you wouldn't give a hoot either.

Hedwig (a.k.a. Darcey) entered, muttered something like “Bloody Hell,” and flew to the rafters to get a few more winks.

So, Sonia and Andrew, if you’re reading this, I wish you the very best of marital bliss all the days of your lives. And after the honeymoon, you might want to reread the Potter series a bit more thoroughly before you have a child and one day get the brilliant idea to send him or her a howler.

Because it’s pretty clear if you read between the lines…

OWLS DO NOT WORK FOR MUGGLES.

PROMPT: So many ways to go with this one — “Weddings Gone Wrong,” “It sure seemed like a great idea at the time,” or my personal fave… the whole shebang from Darcey’s point of view. 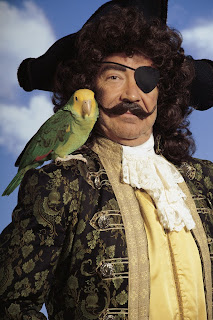 Aye, landlubbers in the Pacific Northwest are a wee bit addled. Methinks it might have something to do with scurvy… Or the fact that rain waterlogs rational parts of the brain for 8 months out of every year.

Anyway, it is no surprise to me that it was a couple of Northwest scallywags who had the fool idea that there should be a day of the year set aside just for yammerin’ in pirate. It’s not known whether our heroes, Ol’ Chumbucket and Cap’n Slappy, were a wee bit squiffy at the time, but no matter — it was a creative idea and that is precisely why yer seein’ it here on the Good Ship Elbow.

The two buccaneers chose September 19th as the day for everyone to go on account since it happened to be the birthday of Cap’n Slappy’s ex-wife. He claims that that he picked the date so that he would remember it, but methinks he just wanted a good excuse for callin’ her a thievin’ wench.

Well, humor columnist Dave Barry caught wind of the notion in 2002 and, shiver me timbers, the bloomin’ day went global!

So Mateys, if you’d like to celebrate International Talk Like a Pirate Day, here’s a Pirate Dictionary to help you get started.

Mutter and scowl a lot.

And what the heck —

Here’s some piratey inspiration to get ye started —

How I Became a Pirate by Melinda Long and David Shannon
Do Pirates Take Baths? by Kathy Tucker and Nadine Westcott
Voyage of Plunder by Michele Torrey 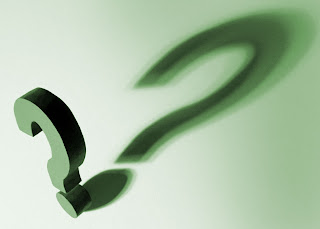 You tried something NEW?

In fact, at this very moment, under a cozy little warming lamp…

A dozen future egg-layers are making themselves home in my home.

I’m pretty sure those girls are going to provide some great creative fodder right along with the eggcellent breakfasts. 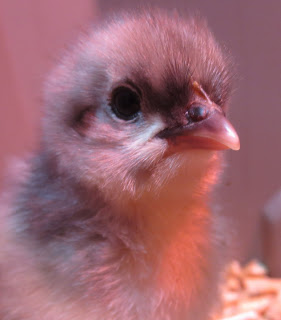 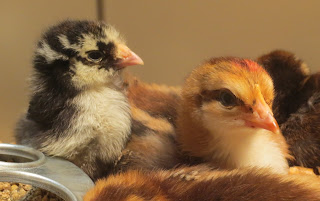 PROMPT: Jump into something totally new, and see what it does for the Elbow in you.
Posted by Barbara Davis-Pyles at 6:00 AM 2 comments:

Geeks and Gamers and Goths! Oh my! 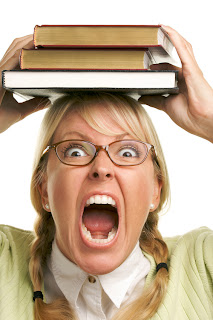 Ah, the tribes of the High School Jungle.

I remember them well.

I also remember how my placement among them was assigned early…

You see, one day I was over at my best friend’s house. The school year had just begun, so we were talking about our teachers and class projects. That’s when my friend’s sixth grade brother strolled in, overheard our conversation, and spat,

To this day I remember that moment…

How my eyes felt like they were going to take leave of my face.

The sound of the gasp that escaped my lips.

The shaking of my cranium —

Holy cow, how could anyone hate school???

I could not get my head around this concept.

I wanted to shout, “What is WRONG with you? How could you possibly find a single thing that’s not totally AWESOME about school???”

Heck, I thought there should be school on weekends, holidays, and all summer long.

I just wanted to make sure that every single one of them led straight to the library.

But I didn't say any of this. I just sort of sat there like a sputtering fish.

The sixth grader simply looked in my direction, raised an eyebrow as if he could read every thought, and shook his head.

Then, long before our subjects and tribes were divided, back when we still played hopscotch and foursquare, my lot was cast by this too cool for school sixth grader…

Was all he said.

So, I went home and read a book.

Then spent the next 22 years too school for cool…

and rockin’ the mandatory eyewear.

PROMPT: What’s your tribe — its rituals, its legends? Ah, such fertile ground for creative exploration!  And if you’re even thinking of dabbling in Y.A. fiction, you need to know the lay of the high school land and all its inhabitants. Pick up The Geeks Shall Inherit the Earth by Alexandra Robbins for a quick refresher course.
Posted by Barbara Davis-Pyles at 6:00 AM No comments: 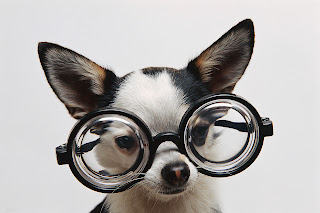 Remember the scene from the movie Field of Dreams when farmer Ray Kinsella hears a voice that whispers, "If you build it, he will come?”

Well, they say something like that in Seattle, too. As in…

You see, just like the Emerald City in the merry old Land of Oz, the Emerald City of Seattle is a magical place. In fact, it casts a certain spell on the folks who move there. Within a month, they find themselves saying things like, “I’m so glad I've moved to this awesome city! And now I've closed the door behind me such that no one else can come in and wreck the place.”

You see, I lived in Seattle during much of the rise and fall of Grunge. It was a heady time, and a lot of people were moving in. So, naturally there was a lot of traffic on the gravel path around the much-loved Green Lake.

As a result, the city came up with a plan to widen and pave the path so that there would be room for everyone and Chihuahuas would no longer get trampled.

But here’s the thing — the neighborhood folks did NOT want this. In fact, they started showing up at every planning meeting to protest. “If we build it, they will come!” they said. “So what if half of our Chihuahua population is in traction right now, the answer is NO!”

Finally (after Chihuahua injury number 757, I’m guessing), the neighborhood relented, and the new path was built.

I have no idea. I moved away.

Recently, however, I had the opportunity to walk the glorious Green Lake path. Honestly, I couldn't really determine whether there are more folks enjoying the stroll now than did 20 years ago. However, I did note all of the bright, shining, smiling faces…

On each and every Chihuahua.

And just in case you think my little tale is a wild exaggeration and that I’m being too harsh on the wondrous Emerald City, today just so happens to be National Stay Away From Seattle Day.

Go ahead, Bing it. Then enjoy this little e-card on me.

PROMPT: Whether you’re keeping folks away in Seattle or keeping it weird in Austin, every place has got its own personality. Is yours cool hipster or persnickety spinster (cough… Seattle)? Write about your place in the world today, or the wondrous world you've built in your manuscript…

Then plan your move to Seattle — Trust me, they need someone just like you!