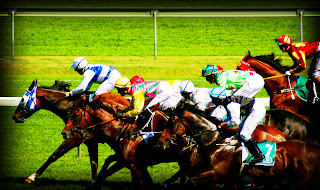 What a race!
If you missed Saturday’s 138th running of the Kentucky Derby, you missed two incredible minutes of inspiration.
The winning horse carries the moniker “I’ll Have Another”. The story goes that he was so named because the owner is known to say, “I’ll have another…”
Cookie…
whenever his wife goes on a baking binge.
So the story goes.
And what a story it is!
I’ll Have Another was purchased as a yearling for $11,000. Well, if you know anything about thoroughbred racehorses – that is a markdown worthy of the Dollar Store bargain bin. In fact, at the same sale where I’ll Have Another was offered, three yearlings sold for over 1 million dollars apiece.
In other words, when most buyers saw I’ll Have Another, they said, “I’ll have another…”
Horse.
Hmmm… Did you ever feel like you were worth a million, but those around you somehow didn’t notice?
Then the big chance – the big race! And I’ll Have Another gets saddled with a young rider who’s never even ridden in the Derby before. If the horse could talk, he would have most likely said, “I’ll have another…”
Jockey.
Hmmm…Have you ever had to deal with folks who lacked the experience you needed to help you reach your goals?
Okay, so the horse already has a couple of strikes against him, and then who comes calling? Bad Luck.
When the post positions were drawn, I’ll Have Another received #19. That meant that he would break from the gate in the farthest position from the rail – WAY outside. Technically, he’d have the most distance to cover in this blistering race. What’s more, no horse in the history of the Derby has ever won from a starting position that far afield. I’m pretty sure the owner, the trainer, the jockey, and the horse wanted to say, “I’ll have another…”
Post position.
Hmmm… Have you ever had a bit of bad luck that seemed impossible to overcome? So impossible, in fact, that no one had ever conquered it before?
So, what does this horse do? He does all he can do. He runs his race…
And he does the impossible.
You can to.
Run your race.
And remember, you only have to win by a nose…
Or you can be like our 2012 Derby champion and stomp the pack by a length and a half.
You can do it.
And before you know it, you’ll be saying, “I’ll have another…”
Success!

PROMPT: Today is a great day to do the impossible! Because really, there is no such thing. What are the “impossible” dreams that live inside of you? What’s your race? How do you want to run it today? Get creative. Try something new. Leap from that starting gate!
Or you could just wander around aimlessly and chew on grass…
You decide.
But I, for one, hope you choose to WIN!
Posted by Barbara Davis-Pyles at 7:20 AM