2008 was a BIG year for a lot of people. For me, it was the year that I was first prescribed bifocal lenses. And while Bono can wear them and still be cool, let me tell you, they did nothing for me. Actually, that’s a lie. They did do something for me… something other people seemed to notice.
It started with those furtive, sidelong glances and quickly escalated to whispers. The whispers grew to shout-outs whenever I wore my hair up. Apparently, I had a doppelganger, and she was (gasp)… Sarah Palin.
Let me interject here that I personally don’t think I look like S.P. To me I look like, well, me. After all, I’ve been waking up with the same face for decades. But that doesn’t matter when it comes to those strange twists in the space-time continuum, and so… back to 2008.
As you can imagine, that year was a “giddy” time. As the months progressed, it didn’t matter whether my hair was up or down – folks were having fun with me. Even my own father joked, “Gee, I don’t remember being in Alaska back then!” Thanks, Dad. That is NOT something I want to think about.
Anyway… my relief was ENORMOUS when Obama was elected. After all, I had fretted for months that I’d be called up for active duty as a stand-in double – and maybe have to take a bullet for the new V.P. (I still shudder) Oh, joy of joys that this strange life hiccup would end with the failure of the McCain campaign.
But no. Those Sarah moments still happen, and I must admit that the experience has changed me a bit – I catch myself saying things like “You betcha” and “I can see Canada from my house!” (yes, I can). But, thankfully the condition hasn’t progressed to those annoying nervous winking tics or “thumbs up” signs. For the most part, I am polite about it all. I smile and have chatty conversations with strangers where we all enjoy the joke… on me. However, there are a few people from the past year that I wish to address individually:
·         To the folks in Mt. Vernon who paid for my lunch and left the nice note – I am so sorry that you shelled out cash for the wrong person. I feel a little guilty about it, but the burger was delicious. By the way, I really have enjoyed my stay here in Washington… for the last 20 years.
·         To the guy desperately calling, “Sarah! Sarah!” as I made my way to baggage claim in the Phoenix airport last fall –Sorry, sometimes I just choose to ignore. This was one of those times.
·         To the x-ray technician who thought it would be hilarious to call my husband “Todd” – This one would have been a real knee slapper, but my tibia was cracked in two places at the time. Trust me, it’s funny now. “Todd” and I are busting a gut over it.
And so to avoid any future confusion, ill-spent cash, or awkward moments, I’d like to make a brief public service announcement – 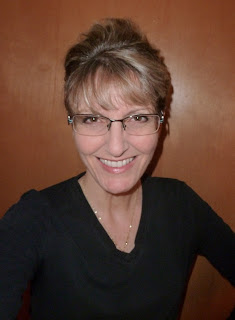 If you see this woman in grocery stores, airports, fuel stations, coffee shops, zoos, libraries, restaurants, etc. – she is NOT Sarah Palin. Thank you.
PROMPT: Have you ever been mistaken for someone else? What if someone thought you were an ex-con, a supermodel, or a political candidate widely believed to be a few fries short of a Happy Meal? Are you a twin? What if you were? Think about Disney’s Parent Trap and have fun with the possibilities. If you’re an artist, what does doppelganger bring to mind? If nothing, I’d say go with painting “pears”. Are we gonna have fun with this? You BETCHA!
Posted by Barbara Davis-Pyles at 6:53 AM