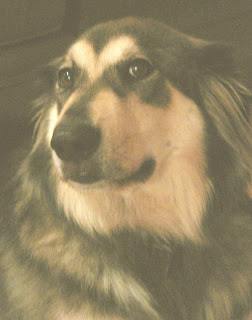 Guilty
Just for the record, my tibia did not break from a fall off a soapbox. It broke when it got in the way of love. Puppy love.
My dog loves to show off for a guy named Jackson. Who can blame her? He’s got good breeding and comes from a long line of shepherds, so you’ll never see him in an unemployment queue. Anyway, her preferred method of showing off for her “boyfriend” is running full tilt around the house. This is where the tibia part comes in. One day I took a step outside and was, shall we say, “love struck”.
From my place on the ground and the position of my leg, the ER suddenly seemed like a good idea. And that’s when the fun began.
“How did the injury occur?” asked the intake person.
“My dog ran into me,” I winced.
“Your dog ran into you?”
“Yes.”
“Your dog ran into you.” It was a statement this time, and her left eyebrow was raised just a little. At that moment I was pretty sure that someone would soon be riffling through my file to check whether I was a frequent flyer on a drug seeking mission.
In the exam room I answered the question again.
“Your dog ran into you?” You could almost hear the eye roll of Medical Person 1. She left the room.
“She weighs 83 pounds!” I called out to no one in particular.
“Her dog ran into her” made the rounds.
“So, your dog ran into you,” Medical Person 2 said flatly, when she appeared at my bedside. “Gee, it doesn’t look very swollen.” Then the poking and prodding commenced. I bit my lip, and when she was through, I peeled myself off the ceiling.
I refused to cry. But I did lament to my family that I didn’t know how I would possibly be able to do all the things I do in my little world, if this leg thing turned out to be something serious. Never one to miss a creative opportunity, my daughter whipped out her sketch book, and in no time flat she had plans for a designer cast complete with vacuum cleaner attachments. I still have the picture. It may come in handy someday…But I digress.
Did you know that x-rays have super powers? Sure, they can see through skin and muscle, but did you know that they can also change personalities?
“We’re not going to touch that anymore, Honey,” said Medical Person 2, when she returned.
“Can I get you some pain meds?” asked Medical Person 1. “An extra pillow… anything?”
Turns out, my tibia was cracked in two places. It was the kind of break that only occurs when a leg is bent sideways. That is, when your own femur (that’s the big bone in the top of your leg) comes down and cracks into the top of your own tibia. The x-ray showed it all. And showing makes all the difference in the medical world.
Showing makes all the difference in the writing world, as well.
In fact, “Show Don’t Tell” is the mantra often repeated by top dogs in the profession. But very few of them explain exactly what it means. And so, because I am your friend, I’ve tried to do that in my little slice-of-life episode. If you read it again, you may note that I never told you that I was in pain. Instead, I winced, bit my lip, and peeled myself off of the ceiling. That’s showing. Now you know.

PROMPT: Show me the money! Show the pain, joy, anger, and bliss in your writing. If your character is anxious, I want to feel the sweat on his palms and see the tremor in his finger tips. Make his mouth so dry that I need to fetch myself a glass of water. Show. Show. Show. If you’re an artist, you already know how to show, so maybe you can show me some broken things. We’ve covered legs – what about hearts, promises, or vows? So much to show, so little time.
Posted by Barbara Davis-Pyles at 7:14 AM